Consumer choice is generally a good thing. For much of the consumption that happens in my house – coffee, lego, bike parts – we understand our preferences, and our choices aren’t terribly complicated. This makes it easier to make good decisions. The other consumption categories are not so straightforward. For example, it is complicated to keep track of how much electricity we consume and the price we pay for it. 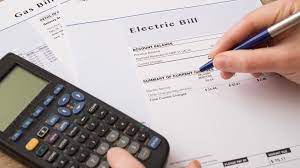 Many of us have no choice when it comes to electricity providers. But several jurisdictions (including 13 US states and DC) support “retail choice.” In these markets, the incumbent utility provides transmission and distribution services for everyone. But households can choose to buy electricity from the utility at a default (regulated) rate or sign up with one of the many retail providers offering to source electricity and supply retail services. 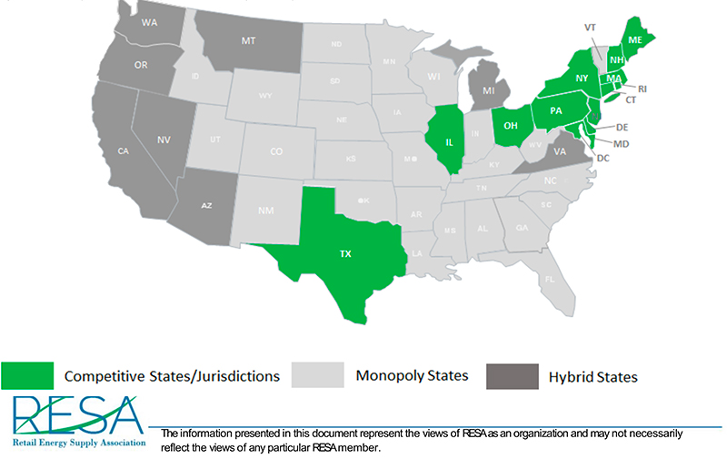 Early proponents of retail choice hoped that allowing for-profit retailers to compete with the incumbent utility would bring innovations in customer service and reduce costs for consumers. We have seen some consumer-friendly innovations. And a significant number of residential customers in these markets are now exercising their right to choose.

But there are growing concerns about customer confusion, high retail prices and deceptive marketing practices. Some states have begun to regulate these markets more strictly. Massachusetts considered shutting down retail choice altogether.

As regulators deliberate their way through retail market reforms, we could really use an objective and careful analysis of how electricity consumers are faring in these markets. Cue this new working paper by Energy Institute graduate student Jenya Kahn-Lang (and outstanding job market candidate). Jenya combines tons of consumer-level data, a survey of retail choice customers, and intuitive economic modeling to explain what we’re seeing in retail choice markets (and why we should be concerned) .

A short blog post can’t do justice to Jenya’s impressive labor market post. My goal here is to draw your attention to five striking facts from the paper, summarize some high-level insights from its economic modeling, and get people talking about this important issue.

Unlike coffee beans and bicycle parts, electricity is fairly homogeneous. My laptop charges the same no matter who sells me the kilowatt hours. So you might expect the electricity prices offered by competing retailers to be very similar…

In fact, Jenya finds that consumers in the same retail market pay very different prices. These figures plot the distribution of retail electricity prices (measured in dollars per kWh of electricity) that retail customers were paying in two of the markets Jenya studied. In case you were wondering, only a small part of this variation can be explained by different attributes (such as differences in renewable energy content).

These data on retail electricity prices can be broken down by income group. The chart below shows the average prices paid by residential electricity consumers in Baltimore. 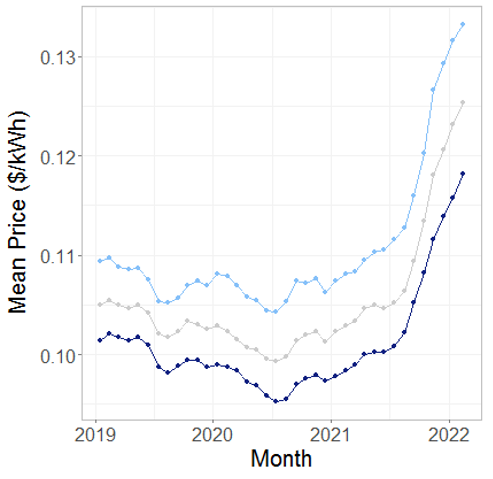 What is happening here? Jenya rules out a few possibilities. Some retail suppliers sell “green energy” based on a renewable supply. This comes at a higher cost, but she finds that wealthier households have higher demand for green power, which should cause the price gap to go the other way.

Another possibility is that higher rates reflect the additional costs of servicing customers who might not pay their bills. But in Baltimore, retail vendors get paid even when customers are late, and the utility softens missed payments for all vendors, so that can’t explain the discrepancy.

Fact 3: Prices are rising (if you’re not careful)

When households sign up with a new retail electricity supplier, they typically sign a contract at a fixed retail price for 2-3 months. After that, it’s quite common for these supply contracts to auto-renew month-to-month at an updated retail price.

Suppose a majority of consumers do not pay attention to their electricity bills. If for-profit retailers understand this, they can raise their prices over time. Some attentive customers will notice this. But for the majority of customers who aren’t very careful, it can take months or years to figure it out.

Jenya documents patterns in the data that are consistent with this story. Using detailed billing data from the Baltimore market, she can see how long a customer has been with a given provider and track changes in contract renewal prices over time. The figure below shows how retail prices go up for customers who don’t understand (or don’t care).

To help consumers navigate this complex environment, regulators have set up comparison websites. If you’re an active searcher type, you may have used one of these websites to help you find the retailer that best suits your needs.

Who wants to spend their Saturday night going through lists of contract clauses? Not me. Among Jenya’s survey respondents, the most commonly reported method of signing up with an electricity provider is through an in-person marketing interaction. In other words, retailers are actively engaged in direct marketing to potential customers.

Herein lies another potential opportunity for retailers to make a price distinction between active searchers and the rest of us. Jenya compares prices on comparison websites with prices offered through other signup methods (e.g. direct marketing). The figure below shows that customers who sign up through the comparison website pay significantly lower prices. 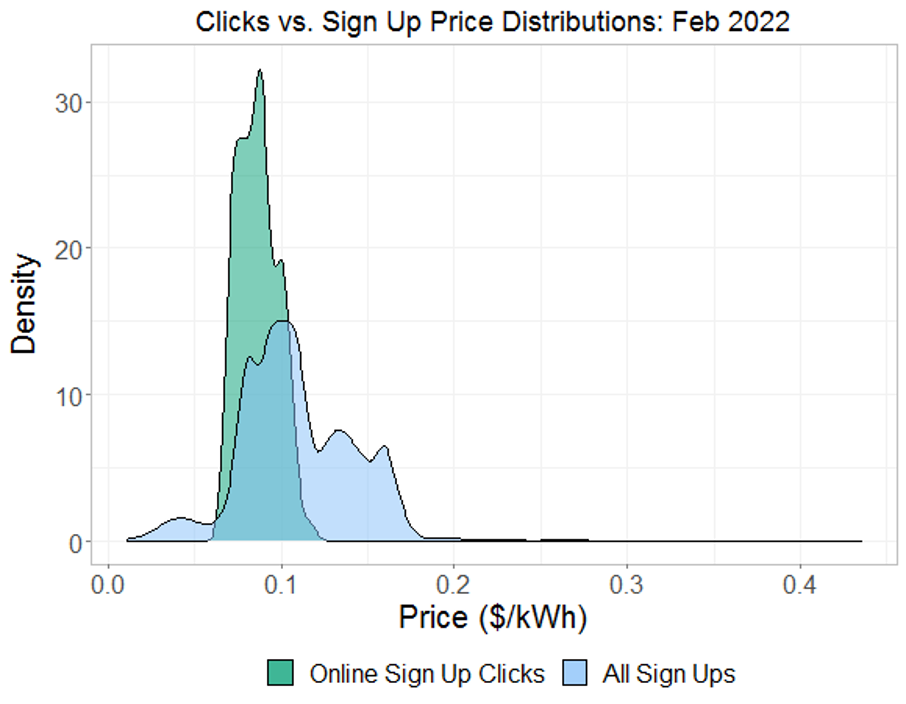 Given the facts we’ve looked at so far, it’s clear that direct marketing plays an important role in attracting certain types of customers. Jenya collects data on these marketing activities by zip code to better understand how efforts are distributed. In marketing data and in its consumer survey, it finds significantly more direct marketing activity in lower-income neighborhoods.

Why do low-income households pay more for electricity?

To understand the market forces that give rise to these facts, Jenya constructs an economic model of market supply and demand. On the demand side of the model, consumers do not pay close attention to their bills. Some consumers find it expensive to search for the best price. On the supply side, savvy retailers understand this. Direct marketing allows them to recruit customers with high search costs and charge them higher prices. Marketing is expensive, so retailers focus their direct marketing efforts on areas where marketing costs are relatively low.

Jenya brings this economic model to real-world data to investigate Why lower-income neighborhoods end up paying more. She finds that lower marketing costs in low-income areas (for example, these neighborhoods are more densely populated) have an important role to play. Overall, the price gap can be mainly attributed to differences in marketing costs on the supply side, although differences in choice behavior on the demand side also play an important role.

Do electricity consumers benefit when they have the power to choose?

Overall, this research leads me to question whether the benefits of opening up retail electricity markets to competition can justify the costs. On the benefit side, there is evidence that some retail choice customers are willing to pay more for premium product attributes (e.g., “green” energy options) that might not have been provided in the absence of choice of detail. But on the cost side, it seems that many households that sign up with a retailer end up paying more than the regulated rate. If low-income households are particularly vulnerable, this raises both efficiency and equity issues. I’m curious to hear what our blog readers think about the trade-offs between consumer protection and innovation in the retail market highlighted by this great article.